Thankfully, no other bummers yesterday. I had enough yesterday morning to last a few weeks. Today started with my rustling the kids out of bed at 6:30 in an (unsuccessful) attempt to get everyone out the door by 7. As it turned out, the timing worked great, especially considering I didn't have a transition area to set up. It was great to see the group again, possibly for the last time until the Polarbear in May.

Because I was only swimming, I put in a longer warmup than usual, about 12-1400 yds. I was seeded in the first heat which was made up entirely of relay swimmers. For some strange reason, I had more butterflies than any other race this season. Maybe it was the fact that it was just a swim, so there was no excuse to hold back. Maybe it was all of the people inside watching- they can't watch that easily in the open water. Maybe it was swimming next to a guy who beats me in practice....or the chance that some high school swimmer is there I don't know about...in other words...ego. Yeah, that's it.


I was the first out of the water, ran out to Nick, tagged him, and watch him ride off in first place.I later learned that he actually stopped twice- once due to a puddle-covered pothole that rattled him, and another because there was no one around and he was afraid he was off course. He even started taking his cell phone out of his baggie, until someone came by. What he didn't know is that his dumb parents didn't have their phones with them so we couldn't have answered anyway. Without looking at the results, I'd guess he came in with a split of about 49 minutes for 14 miles, which comes to about 17 mph, including stops. Given that it's his first ride ever over 8 miles, first race, it was raining, he's 13, stopped twice, and had the big black pedals with sneakers, he did a fantastic job.

Leah took the handoff and charged into the 3 mile trail run. Chirstine went with her to help her confidence. I heard she stopped to walk about six times, for only 20 seconds each. When she emerged from the woods, headed for the finish, she looked great. Strong the whole way. Check out her form: 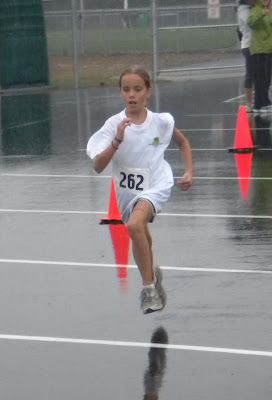 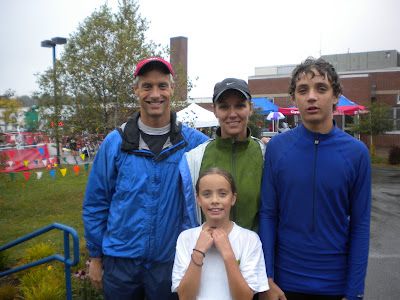 It was really fun to involve the whole family. After they warmed up and had a bit to eat, they were actually enthusiastic about the experience, and have asked to do it next year.
Posted by MaineSport at 12:46 PM