The Sound of Silence

I headed out for a 16 mile run at about 5:20 this morning. It was "crisp"....about 15 degrees crisp. But the roads were clear, there was no wind, and the schedule said today was a long run of 16 miles. I wore a long sleeve shirt, covered by a t-shirt. Over that I put on my hydration pack, sort of like a Camelback, but made for running and much more comfortable. Over that was a thin windbreaker, then finally my reflective vest. My thinking was that I should keep the hose/straw out of the cold air so it wouldn't freeze. As is turned out, it did freeze about 5 miles out. Not good. Fortunately, it thawed after putting it against my skin.

The first two miles were slow and ended at the top of a long uphill. From that point to the end, I averaged 7:54 and felt pretty good the whole way, with the last few miles more like 7:40s. That tells me the training is going fine.

I brought my iPod, but never used it. Sometimes I can simply get in a mental zone where I don't need the stimulation of the iPod to get me through. Today was one of those days. With the quiet, I was able to hear my feet strike the pavement. It sounds like a small thing, but trying to keep quiet foot strikes led me to shorter strides with less heel striking which leads to a more comfortable, less damaging and faster run. I remembered that when I race, always without music, the sound of my running is a new sensation. One rule in training is to mimic racing conditions as much as possible (or advisable) in training. I hope I can get through more runs without the iPod. I think it could make me a better runner.

At the end of the run I saw Christine driving Nick to school. They stopped a gawked at me. While I hadn't realized it, my face and hair were all frosty white and I had a huge icicle handing from my left ear. Quite a sight. 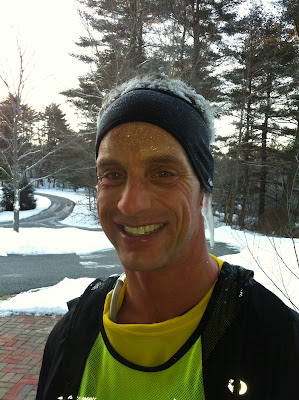