Some may think elbow room means extra space. Others will remember it as a bar in Ft. Lauderdale that college swimmers frequented. In my case, it means time since I broke mine. On December 20, I fell on my stupid snowboard, broke my elbow, and put a serious dent in my swimming. After a great run of 13 weeks with over 10,000 yds/wk, I went 6 weeks with zero yards. Zip. Nada. My bike and run made great improvements, which are far more important, but my "ego" sport took a major hit.

I've been working on my race schedule for the summer. Other than Budapest, my only Oly race is Mooseman. That isn't ideal, but I'd really like to cut back on the travel time compared to last year. It just took too much time away from home. I added the Fireman Sprint in late August- two weeks before Budapest. Normally I'd like to have it three weeks out to ensure full rest, but there's nothing else that works for me after Bethel. Other than Crank the Kank, I'd like to do some other time trials- three possibilities are Kennebunk, Cape and Freeport. The problem is that they all fall either the day after another race or are the same day. For example, on May 30, there's a new 4 mi road race in Falmouth, Pineland has a running festival with all sorts of distances on the trails, and there's the Cape TT.

Finally, on the drive home tonight, I saw about two dozen bikers on the road. In shorts. In March. I'm really looking forward to a good long ride outside this weekend- the first one of the season. I hope the forecast holds.
Posted by MaineSport at 7:37 PM 6 comments:

54 degrees. On March 7. No wind, clear skies, and 54 degrees. Did I say it was March 7? It was an incredible day, allowing me to go with shorts and a t-shirt without a chill. The race also started at 11:00, allowing for a very gradual morning of eating, stretching, warming up, etc. I could get used to these late starts.

My approach to the race was to be a rabbit for Jeff. He's been 20:20 to 20:40 the last three years, and really wanted to go under 20. I beat him at the Cape 10 mile race after running with him for the first seven miles. He's been training really well, and I wanted to see him break that barrier.

And that's all a load of crap.

I wanted a good time, something under 20, but I also wanted to beat him- in a friendly, ego-driven, collaborative rivalry sort of way. At the start he asked me how fast I would go out. Knowing we had to be under 6:25 average, and adrenaline would get me going, I said somewhere around 6:10. The horn blew, and I got caught up in the surge. At about 1/4 mile, I looked at my Garmin and just about fell over- the current pace read 5:15! Whoa, there! Sure, the buildings could be friggin' with it, but even allowing for 30 seconds, it was way, way too fast. So I eased up a bit, actually feeling pretty good. At the 1/2 mile, I was at 2:53. I hit the big hill at .7, and all of these short, skinny rabbits flew by. One guy was in bare feet. Damn that gravity thing. Mile one came in at 6:05. With a big, slow hill, that was fast. It was around that time when I heard Jeff huffin' and puffin' behind me. We continued on shoulder to shoulder to the turn around and back. The whole time I was wishing he would just surrender. I hurt all over, and had little interest in a battle. But I continued on. Mile 2, 6:23.

Then we got to go back down the hill. You'd think we would have an advantage going back down given our size. But Mr. Garmin doesn't show that. We barely went any faster than on the flats. About 1/2 way down, we heard this rumbling herd behind us. They gobbled up up, spit me out the back, and Jeff tried to hand on. To his credit, he didn't let up at all. Mile 3, which included the down hill, 6:23.

Takeaways? I really need to work on my hills, especially my downhills. I need to find a flat 10K in the next couple of months. I've never broken 40 min, and know I can do it now.

And as for the post-race nutrition, courtesy of Brian Boru and Allagash.... 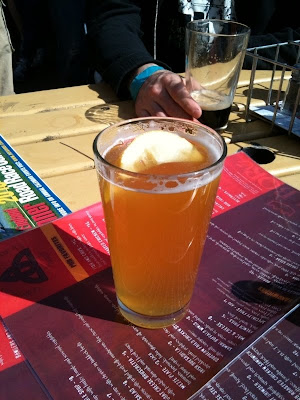