Boston is just 33 days away. Things have been going well, including the training. I don't have a single theme to share, rather several smaller happenings and thoughts:

- A couple of weeks ago I went out for a morning run around 5:35 and was faced with a beautiful sky. The horizon was just starting to light up with an intense pink/red/orange color. After a winter of training in the dark, it was very uplifting. It was a sign that we're almost through winter, the days are getting longer, I won't have to train in the dark much longer, and that this "marathon thing" indeed is getting closer. It also got me thinking about horizons and what they represent. By definition, horizons are always far in the distance and never get closer. I think it's important to balance "horizon thinking" with living in the moment. It's important to have long range goals and plans, to think about long term implications. However horizons can also be lonely and always leave you wanting. One of the greatest feelings is when a thought starts on the horizon, steadily moves closer, then becomes reality.
- We had a great February vacation at Sugarloaf. I used it as a time to get some good exercise, but also recover from the poundings. Last year I went for a couple of early morning snowshoes up the mountain. This year, I wanted to get to the summit. My first try ended at the top of the King Pine chair. At that point, I needed to turn to the west, straight into a stiff and very cold headwind. I wasn't prepared for that, so opted to head back down. Two days later, I headed out the door at 4:45 in the hopes of making it to the summit for sunrise. It wasn't too cold, the skies were clear, and there was very little wind. I decided on a more direct route, also one that was potentially more protected from the wind, and made my way up Narrow Guage. As I climbed, it seemed as if I was watching the entire region wake up. I made it to the top just after sunrise, and saw this: 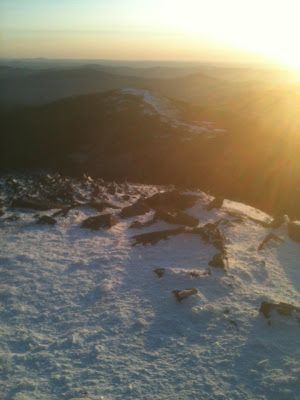 - On Friday night that week, we received 10 inches of powder, a rarity for this winter. High winds were forecasted for the next morning. When this happened several times last year, lifts were delayed and then only a few opened. It was incredibly frustrating to be unable to take advantage of the new snow. So this year I strapped my skis on my backpack, threw in by boots and helmet, and snowshoed nearly to the top. It was very slow going because while the pack was heavy, I didn't want to sweat and get my clothes soaked through. When I got to the top the winds were howling- probably gusting over 50. I changed into my ski boots in the lee of the t-bar hut and headed down Sluice. It felt like I was floating the entire way down. It felt great to make the freshest of tracks: 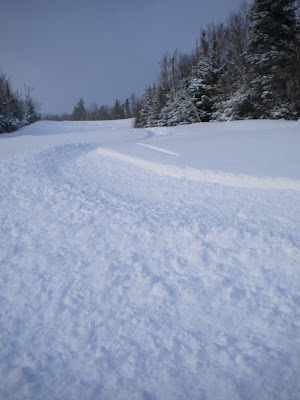 - The running has been going well. Four weeks ago I did 18 miles, splitting 73:30 and 71:15. I was able to fight through a physical and mental low point around miles 12-15, and then felt great at the end. Last week, I did another 18, this time on a different route, and one that might be just a bit harder. I split 71:53 and 68:55, a huge improvement over the first one. In hindsight, I may have pushed too hard, but it was a big confidence booster. I hit that same low point at mile 12, and got through it again. I'm sure there will be a couple of low points in Boston. I know I can get through them and have something left on the other side. One highlight on that second run- as I entered the path going around Back Bay, the moon was enormous and just setting. There were clouds all around, so the sky had this medieval feel to it. Also, I found that wearing compression socks for the morning makes a big difference with recovery. I don't have time to take an ice bath or lie with my legs elevated for a few hours, so the socks are one of the few tools to help recovery. So far I've been able to avoid the fashion comments at work.....

- With five weeks to go, it's all about recovery and resting. I'll do 12 tomorrow morning, but at a slower pace than the 18. Next week my long run will be 9. The high-end interval workouts have evolved to much more race-specific pacing. This is the critical time of the campaign. I've seen magical results come from thorough tapers. I'll also spend time getting everything in order for the race- logistics, clothes, nutrition, etc. With a couple of weeks to go, nothing will be left to chance. That will put my mind at ease and enhance the resting process.
- I was heartbroken to read about a friend in California this week. I got to know Marit electronically in late June 2010. She landed in the hospital with DVTs, or blood clots in the legs, about a day after I landed in the ER with PEs, or blood clots in the lungs. Marit is a terrific athlete, having competed in Kona the prior October. While I had a tough couple of months, her road has had many more bumps along the way. Through it all, she worked hard at keeping up her positive attitude. This week, however, new clots developed. That means she'll be on coumadin for the rest of her life, have regular blood checks, and carefully watch what she eats every.single.day. That's because vitamin K promotes clotting, just what the coumadin is fighting. So she needs to have a consistent amount of spinach, other green leafy vegetables, cranberries and other foods every day. It's all about striking a balance between K and the drug. Coumadin also affects your lifestyle. A bleed of any sort may not stop. That means you have to avoid situations where you might get hit or cut. Back in 2010, I feared exactly what Marit is going through. I suppose it's always possible that I clot again and end up in the same boat, for we never found out why it happened in the first place. So I don't know what to avoid. I do know that I'm fortunate to be able to live the life I want. My thoughts are with Marit and her family. I know it's a tough time, and also that she will keep moving forward with an inspiring and positive attitude.