A few weeks ago I launched into an uninformed, impromptu game of speed golf. I ran around the 9-hole Castine Golf Club with a full bag of clubs in about 47 minutes. The next day was 42 minutes. Upon returning home, I looked up the rules of speed golf, and was pleased at what I saw. The score is the sum of your time in minutes and shots taken, you play with between one and six clubs, and you don't pull the pin.

Last weekend we returned to Castine, and I couldn't wait to try again, this time using the real rules. I gave a great deal of thought as to how I should approach it. Sort of like a triathlon, the right equipment is critical. The first task was to choose a pair of shoes- 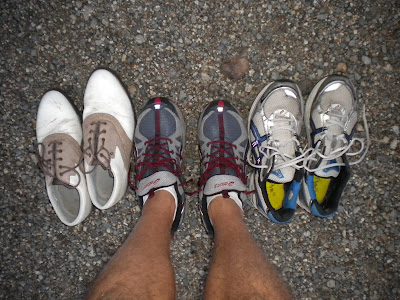 The golf shoes have a better grip while swinging and stay fairly dry, while the running shoes are the most comfortable and possibly the fastest. I went with the train running shoes, figuring they would stay drier than my road shoes. Good choice. Speed golf happens early in the morning when there is a nice layer of dew.
Club selection comes next. I wanted to take a minimalist approach, figuring 1-3 clubs would be easy to carry. A critical part of golf is choosing the right club for the distance required. That's why most golfers carry something like 14 clubs. Using only three obviously gives you far fewer options. I went with a 5-iron, pitching wedge and putter- 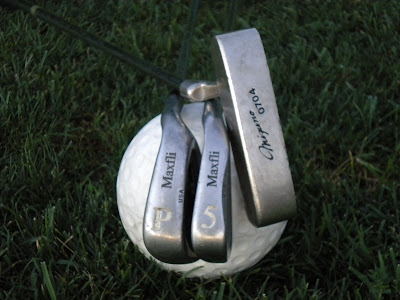 My 3-wood, an obvious candidate, just isn't reliable enough. Or better said, the guy using the damn club isn't consistent enough with it. If I ever get comfortable with it, I think that's the next addition. For some good golfers, they should be able to reach a par-4 with two 5-iron shots. The club is fairly versatile, working well in the fairway and slightly longer grass. Also, it's my club of choice on the par-3 second. The other par-3, the 4th, is a 7-iron for me, so I just hoped I could take something off of my swing to make it work. As it turns out, it worked well.
As for other equipment, I decided to carry 9 balls because I'm really not very good at the normally dumb game of golf. I can easily lose a bunch of balls in a round. I don't always lose them to the woods or water, either. Sometimes I just don't pay attention or lose sight of the ball on an otherwise good shot, and can't find it. As it turns out, because I was playing with a 5-iron as my longest club, the ball pretty much stayed in front of me, and I only lost four on day one and one on day two. For calories, I took a banana, which was completely smushed when I reached for it after the first nine holes. I included a small towel in the hopes it would cut down on the bouncing fanny pack. I think it probably made it worse, so I ditched it on day two. 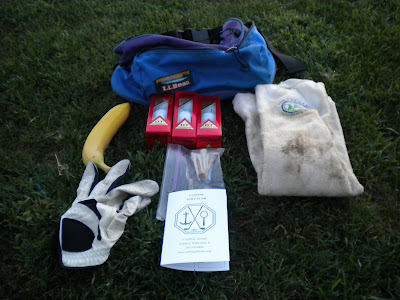 So I got everything ready, warmed up with a bunch of swings, an teed off. Here's a view of the first fairway. Those white spots are seagulls hanging out. They actually posed a problem due the the feathers they shed here and there. Due to my aforementioned inability to follow a shot, little white puffs on the course look and awful lot like little white golf balls, so I ended up going around in circles a bunch of times trying to find my ball. 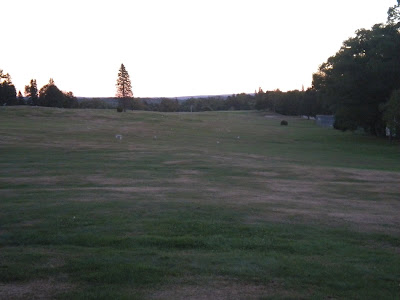 So I whacked the little white ball around the course, and actually played fairly well. Most importantly, I had a blast. Normally it takes over two hours to play just nine holes due to all of the waiting around for others to hit, etiquette, club selection and shot preparation. I finished 18 holes in 1:10. Day two was exactly the same. As I ran up to the ball, I looked at the pin, slope of the lie, etc, knew what club I needed, whether I needed to choke up, got my feet set, paused and took another whack. I'd watch the initial trajectory of the short, pick up my other two clubs, start running, and try to pick up where the ball was landing.
Sometimes I think all of the deliberate work golfers put in is counterproductive. They get psyched out. This way, there was no time for that. There was also no time to get really frustrated with my game. I wasn't dwelling on how lousy the last shot was because I was on to the next shot so quickly.
Many pure golfers think this whole thing is a load of crap. Something about the purity of the game. You need to think of speed golf as a completely new sport. A whole new paradigm. Then you can appreciate the fact that it's a great combination of aerobic activity, interval running, and calm, precise shot making. It's a lot like biathlon where they cross country ski and shoot rifles in the Olympics.
On Monday, day 2, I made a few adjustments. First, I was tired of fishing for tees in my pack during the round, so I loaded up my laces with what I thought would be enough. You can see here I started with six: 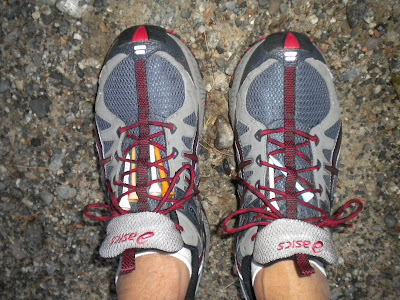 Unfortunately, I lost or forgot three tees in just the first five holes, so I had to start scrounging for leftover tees, most which were broken. As it turned out, I made it to the end without a problem.
Other adjustments included swapping the banana for a Powerbar, ditching the towel, and going with just six balls. My golf game was far worse on day 2 as I added a whopping 12 shots. When you look at the card below, you'll see I am obviously not much of a golfer. I just don't understand how people can play 18 holes, multiple times a week while doing everything else in life. Sure, triathlon takes some time, but it's generally just 1-2 hours. Anyway, I only play a couple of times per year. Having said that, I wonder how many shots I give up without a full bag of clubs. 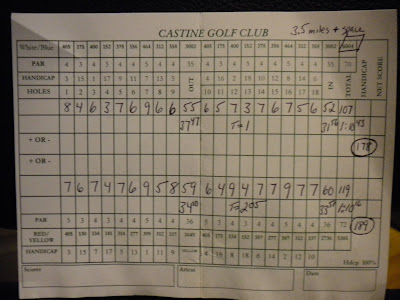