Today was the CELT Sprint Triathlon, a local race that started in the pool that I spent many, many hours in in the 80's. Last year we entered a family relay. This year, Leah and I recruited Nate to take the bike leg. Like last week with Jeff, Nate's effort not only allowed me to participate, but he also gave it 100% knowing that for us, performance was taking a back seat to participation. That means a great deal to me.

Before the race, a woman came us to me and said, "You probably don't remember me, but...." I'm terrible with names, but I did recognize her face. I couldn't remember the context, however. "I was the CT scan technician when you came into Maine Medical." Bingo. Back on June 25, perhaps the worst day of my life, she was the one that ran the CT scan that showed I was in deep trouble with multiple and extensive pulmonary emobli, or clotting. I asked her what went on behind the scenes that day. Technicians aren't allowed to give evaluations to patients, but they do enough of them to know when to raise the red flag. Apparently, a great big red flag went up that day as they immediately called a radiologist in the hospital who was able to look at the scan, then ordered me to the ER. She was very pleasant, helpful, caring and professional on that day. The fact that we then bumped into each other today, at a race, seems incredibly poetic. That scan symbolized the end of my real season back in June, and here was the technician introducing herself as we prepped for a race.

My swim went fine. They sent all of the relays in the first heat. In this race, it's common to get some fast high school swimmers doing relays. I had no idea how it would play out. I was somewhere between "get near the front from the start and hold on," to "stay under control so you don't fade at the end." For nearly the entire 425 yards, a high school swimmer in the next lane over was the only one in front of me, about two body lengths ahead. When I got out of the pool, however, I heard I was the first one out of the water. Huh? Apparently, he swam an extra 100 yards. Whoops. Here's the run to T1: 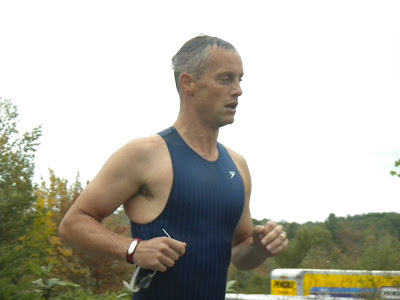 While Nate was out attacking the 14 mile bike course and riding in front, Leah and I got ready for the run. We ran the first part of the course, then she threw in some stretching: 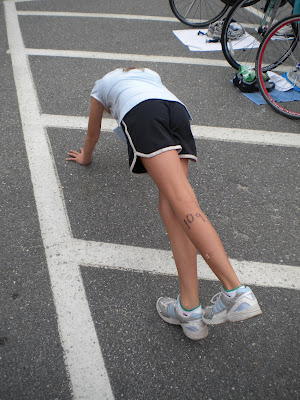 3 miles is a good distance for a 10 year old. I warned her about the adrenaline rush that we all get at the start of a race and to keep it slow and steady. She didn't exactly remember. This is Leah heading out as the FIRST runner on the course: 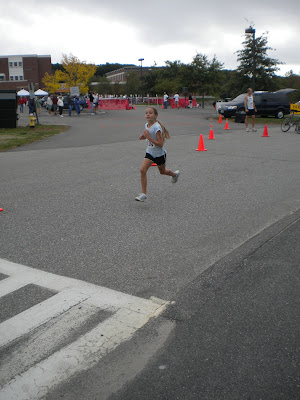 The run was all on a great trail system, and included a "bridge": 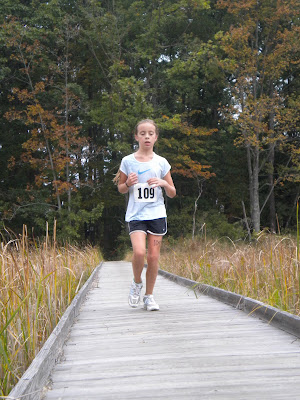 She struggled with side stitches and a knee she hurt in ballet this week, but kept fighting the whole way. With about 1/3 of a mile to go, a 12 year old girl passed us. According to plan, Leah then told me to run ahead to get a picture of her at the finish. So I ran up to the other girl, passed her, and glanced back. Leah was much closer than I expected. So I ran harder. And looked. She was still there. With about 100 yards to go, I looked and saw Leah with a huge lead on the other girl. Unbelievable. There was no way I could get to the finish line and prepare for a picture, so this is what I got: 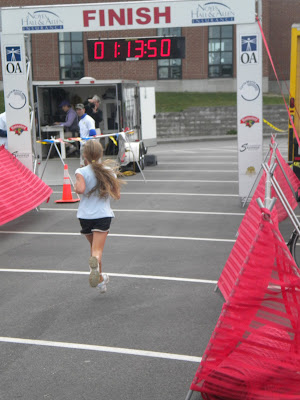 It wasn't an easy run for her. She fought pain and fatigue, walking when she needed to, and beat it all to have a strong finish. I'm very proud of her! Here's the team: 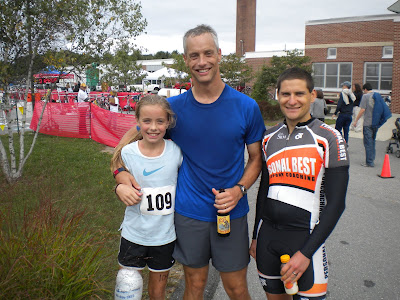 So that's it for the 2010 triathlon season. It sure didn't play out the way I expected, and I have no idea what to expect for next year. But I do have great memories from these last two races, and am very appreciative of the support shown by friends.

You know the rules....keep yourself safe, put a little joy into your life and those around you who you think may merit it, and never ever- that's never ever- pass up an opportunity to kiss someone you love.
Posted by MaineSport at 11:54 AM