I got all of the stuff done I needed to do today, and in general, was fairly lazy. I was even able to watch a movie (including a 15 minute nap) before lunch. The day started with a 30 min bike ride on the course. That covered most of it because it's two laps. There are three hills, and one might require the small chain ring. But they are very manageable. The hills are really long and strung out. I even found some good spots where I'll be able to coast while going well over 30 mph.

Then they opened the swim course, so I got in for 10 minutes. The water is warm, but not ridiculous. I think the rainfall has helped. The rain has also brought in a bunch of mud, so to say the water is murky is a gross understatement. At least I hope it's mud. I literally could not see past my elbow. I felt like Michael J Fox in Back to the Future, near the end, when family started disappearing from the photo because he had disrupted the space-time continuum.

I'll go for a 10 min jog with pickups before dinner.

I am not a good bike mechanic. In fact, there's quite a bit about this stuff that makes me nervous. I'm always suspicious that something is wrong. So leaving the bike in transition always makes me apprehensive. And to do it the night before is even worse. Here it is, in its designated parking spot, waiting for me to show up early tomorrow morning: 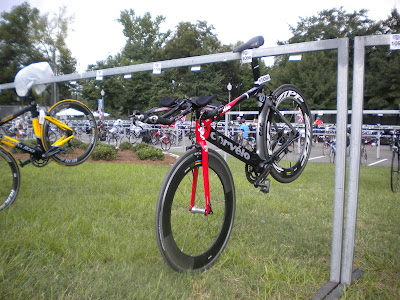 And here you can see many others that have done the same. There's a good chance of rain or thunderstorms in the next few hours and into the night, so some folks covered up various parts. 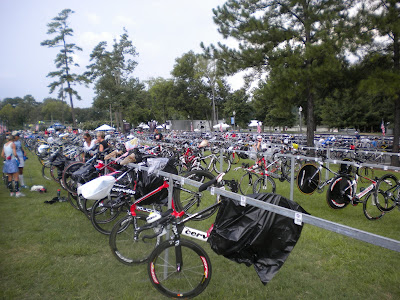