After the AG race, the women went at 12 and the men at 2:15. If you ever get to see an ITU-style race, don’t miss it. You see the athletes every 8-10 minutes, and they fly.
The swim course was different, but faced the same current. The bike was a six lap course, including our first (big-ass) hill on the run. The run was four laps and all flat. I went back to the hotel to change and lie down for a few minutes, so didn’t arrive back at the course until the women were halfway through the bike. I heard one of them had a 2 minute lead in the swim. She held it for nearly the entire bike, but came in with a small group into T2. At that point, I moved over to watch the men’s race, so I have no idea what happened on the run.
Last year I watched Matt Chrabot and Matt Reed ride together then battle on the run until Reed pulled away with about 1000m to go. Both were back for this year’s race. Also there was Tim O’Donnell, who I wasn’t familiar with, but heard he was a very strong runner. Here’s a picture of the men’s start: 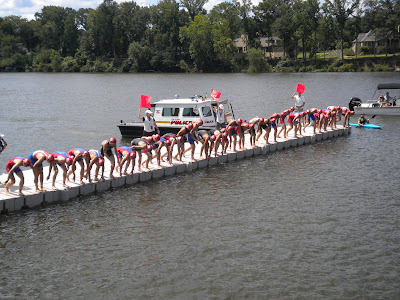 Early in the swim. 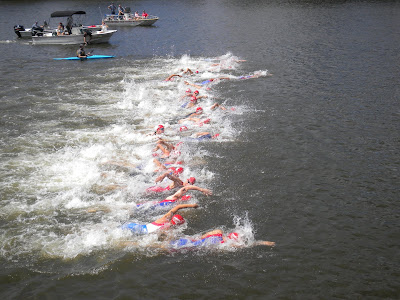 Have I mentioned the river current? It was incredible to see even these pros go practically nowhere against it. These guys typically average 15-16 minutes for a swim. On this day it was about 20 minutes.
Here's a picture of the men starting another lap on the bike. You can see the line behind the front two: 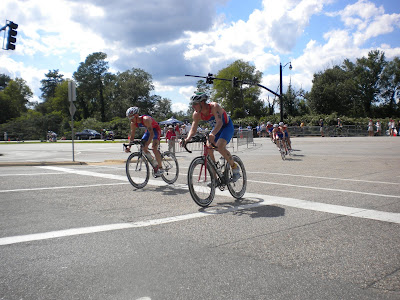 The transitions were blazing fast. Fast and simple.
Women’s T2:


Back to the men’s race….Two of them came out of the water a fair bit ahead, then were joined by the next pair. This lead group of 4 included Chrabot. Then there was a group of 4 about 1-2 minutes back, with Reed at the back of the bunch. For the bike, I stationed myself near the turnaround, which turned right, went up a good hill, did a 180, back down the same hill, then back out on the course. It was incredible watching Reed singlehandedly pull his group up to the other. This guy is really strong and determined. The 8 rode together for laps 4 and 5, then left for the last lap. I moved down to the transition area. When they came in, Chrabot and one other guy had a 60 second lead on the others. That’s a pretty big escape late in the bike. It must have happened on that hill. Reed did his best to catch up and got to within 25 seconds.
This is the end of the third lap:
By the third lap, Tim O’Donnell had moved into third and was trucking along. At the finish, Reed had dropped well back into third. While I feel for him, it was nice to see another big guy labor in the heat. He looked absolutely gassed. Chrabot and O’Donnell are probably 6-8 inches shorter and 20-30 pound lighter. It’s also worth noting that Reed is focused on the longer distances, while the others stick to ITU racing.

Again, don’t miss an opportunity to watch one of these races. Chances are good Burlington will host this event in 2011 and 2012. It would be great to get a strong contingent from Maine over there.
Posted by MaineSport at 8:06 PM