"You Were Very, Very Fortunate"

On July 4, 1939, at Yankee Stadium, Lou Gherig’s stepped to the microphone. Disabled by ALS, a disease that would claim his life two years later, he proclaimed, “Today, I consider myself the luckiest man on the face of the earth. That I might have been given a bad break, but I’ve got an awful lot to live for.” Here’s a baseball and sports icon, thinking he’s lucky. He was giving up the game he loved, and knew his days were numbered. I’m beginning to understand.
Now don’t jump to any conclusions. At this point in time, I expect to be healthy and competing again. I don’t believe my life is in danger. However I’m beginning to understand just how close I did come to death. (It’s hard to write that word.) And this is helping me to look at my life in a different light, to appreciate and treasure and value that which is really most important.
Over the last two weeks, I’ve been busy with medical appointments and plenty of blood draws. The major task has been to get my INR up to an acceptable level. The International Normalization Ratio shows how easily your blood clots. Most people are under 1. By taking Coumadin, my target is somewhere around 2.5, which should prevent further clotting. Given the extensive clotting and blockages, in particular in both pulmonary arteries, a further clot on top of what I already have could easily be fatal. The pulmonary artery takes blood from the heart to the lungs, splitting in two, one for each lung. Then the blood vessels keep splitting and branching out until they are tiny capillaries, at which point the blood absorbs oxygen, goes back to the heart, then out to the entire body. If blood can’t get through the lungs, no oxygen gets to the body and all of the organs- including the brain and heart. That isn’t good. My INR was taking its sweet time getting up to an acceptable level. It was only 1.2 when I got out of the hospital, then 1.6 around July 4th, 1.7, then it actually dropped to 1.6. Throughout, we kept increasing the Coumadin dosage. The dosing is taken very seriously- the drug is also used as rat poison. Take too much, and you bleed out.
All of the testing for genetic blood clotting disorders came back negative. That’s good, however the cause remains a mystery. As a result, my doctor referred me to a hematologist. In doing so, he warned me that outside of major metro areas that allow for medical specialization, hematologists are also oncologists, and the office I would be visiting was at the Maine Center for Cancer Medicine. He doesn’t think I have cancer, and didn’t want me to panic when I saw where I was going. I thanked him- without fully appreciating his warning.
When we returned from a weekend in Castine, I had mail waiting for me. It was a welcome package and forms to fill in before my appointment. I sat down. Wow. I’m filling in forms for a visit to a cancer office. Cancer. Cancer. What am I getting into? To make matters worse, I started Googling “cancer and blood clots.” I went from bad to worse. Then Christine started doing the same. Now two of us were in a tailspin. Then Nick walked in the room and saw the brochure from the Cancer Center. He paused, looked up and essentially asked if I had cancer. We explained that that’s just where the office was, and we’re just checking anyway. I’m not sure how affected he was- as a typical 14 year old, he doesn’t show excessive emotion.
So on Wednesday, I went to the hematologist. Walking in was tough. Here’s the sign that greeted me: 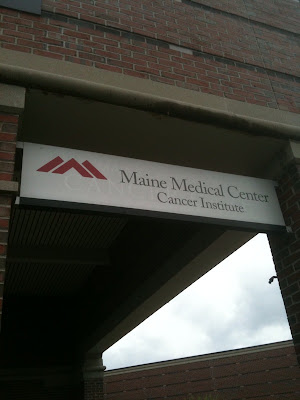 Checking in and going through the normal procedures was depressing. I prayed that I wasn’t going to become a long-term visitor of this office. They even took a picture of me for the computer file. I asked why, and she said, “we have a lot of people with the same name, so this helps.” Now that I think about it, I don’t buy it. That’s what birthdates, addresses and social security numbers are for. I wonder if it’s so they can see how patients’ appearances change over time- while they’re going through treatment. Not exactly a comforting thought.
To make a long story short, I’m going for another CT scan this week, this time for my lower abdomen- to look for tumors. As the doc in the hospital said, clots come from the legs and malignancies. I don’t have anything in my legs, so….. The hematologist really doesn’t think we’re going to find anything. At that point, we will probably do much more specific genetic blood work. My primary care doc completely agrees. Neither covers things up, so I trust their opinions. If I had a type of blood cancer, some of the earlier blood tests would have raised a red flag. And I still have zero additional symptoms. We just have to look for cancer so we can eliminate it as a possibility.
As we reviewed my CT scan from three weeks ago that showed the clots, the hematologist said to me, “you were very, very fortunate,” and explained that it’s very easy to die from what I had. That comment stuck with me. First, I began to realize how close I really came- something like 1.5 millimeters. That isn’t much. Second, and most importantly, I’ve turned around what he said. Instead of “were,” I say “are.” Or in the first person, “I am very, very fortunate.”
Being hit with significant bilateral pulmonary embolisms could prove to be one of the most influential experiences of my life. It has caused me to refocus back on my core values- my family, my health, and my work. In Christine, I have the best and most loving wife in the world. I have two great kids who are healthy. As a family, we are fortunate to live where we do and do the things we do. Nick and Leah will grow up and be great contributors to this world in some still to be determined way. By “great,” I don’t mean famous or monumental. I mean they will be positive contributors, even if it’s in a very localized way. And after all, isn’t that the most important thing we can leave behind?
I am incredibly fortunate to have done the physical things I have done. I love sports and competitions. Some of my clearest positive memories come from high school and college swimming. I don’t remember many times, but I do remember those moments- the great personal breakthrough races where I helped my team. As for triathlon, how many people even get to participate, much less achieve what I’ve done? Two Ironmans, tons of shorter races, all resulting in a spot earned on Team USA. I am incredibly fortunate to have progressed without injury. But honestly, if I had to choose between those accomplishments and all of the people I’ve met through the sport, there’s no doubt I’d take the latter. This is a group that wants to go faster than the next guy given every opportunity in the water or on the road- but when it’s over, helps each other out in any and every way possible. It’s a striking dichotomy and a great tribute to the sport. Triathlon can be a very lonely sport, and one that tests each individual almost daily during solo training sessions. It’s the unending support and camaraderie that gets us through to the next workout and race.

Again, don’t get me wrong- I have every intention of working hard and being competitive again. It will be done in a new light and in a new context, however. Greetings and conversations will be a bit longer and more sincere. There will be better balance in my life. I will look across the lake and view the road ahead with greater appreciation for how fortunate I am to be able to swim, bike and run at that moment and in that location.
And for my family, hugs last a little longer. I’m a better listener, especially for the meaning behind the words. And my life balance is better. I am incredibly fortunate to have had this scare, to have survived, and to have learned from it.
....................................
“You remember the rules. Keep yourself safe. Put a little joy into your life and those around you who you think may merit it. And never ever- that’s never ever- pass up an opportunity to kiss someone you love.”
Posted by MaineSport at 12:29 PM