Today started with my third time trial in two weeks (and last for the season). After the Freeport TT last week, I suspected that my threshold might be higher than I thought. So I decided to cover up the Powertap display and just go hard. My friend and friendly rival Bob started right behind me, just 30 seconds back. We both had solid training days yesterday (I biked 2 hrs. and ran 45 min), so I think we entered equally fatigued. He can reach levels in training I can only dream about, especially on the hills. Last week, however, we saw our TT efforts are fairly even- I out touched him by 10 seconds. I knew he wanted to take me down, and by starting behind me, I was afraid I would be a rabbit for him.
A couple of days ago, I said I would ride harder than normal and risk blowing up today. It's funny how easily those words come in front of a keyboard- when it's time to do it, even though there isn't much on the line, it's tough to look into that abyss.
Most of the course was flat with really long, gentle rollers. It consisted of a small 5 mile loop, then you repeat the first 3 miles of the loop as you start a larger 9 mile loop. The backside had three good hills, but they were short enough that I was in the big ring the whole way. There were also very few corners and intersections, so overall, it was pretty fast.
At the start, I jumped out and went for it. Within a mile, it felt like my heart was going to jump through my chest and I could barely take in enough air. At the same time, I realized I hadn't started my Powertap, so hit the button to wake it up and swore at the operator. What an idiot. I don't think I let off the pace much, but things seemed to get under control fairly soon after that.
Here I am on the first loop. Notice the slow shirt and race number holding me back. I need to change those for next year. 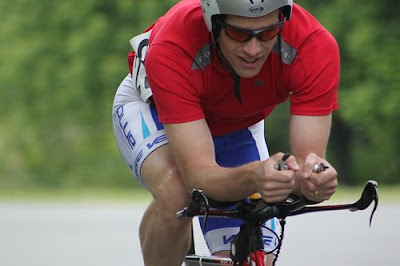 Here I am the second time through, obviously struggling. 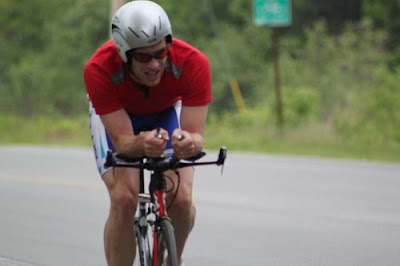 I stayed consistent the whole way, even working the downhills. I was afraid to look, but expected Bob to come flying by the entire time. The race went by fairly quickly, and at the finish, figured I had done well. I waited for Bob, hoping it would be more than the 30 second gap- it turns out I beat him by 22 seconds, which is a victory in my book. He's a very solid competitor.
I finished 9th OA. As for the data gathering, the numbers were good. Compared to Freeport, my cadence was identical (89), VI went from 105 to 102, speed from 23.6 to 24.4, and average power went from 279 to 286. What's incredible is that my normalized power was identical- 293w. I guess I know where my threshold is.
From the finish, I made my way to the end of the first loop to see Nick and ride with him. That's where we nearly had the worst family disaster you can imagine. For those of you that know Cape Elizabeth, the course turned right (more than 90 degrees) from Fowler Rd. back onto Route 77. We both rode the first loop as warm up, and I explained he was to turn right at that point. He rode the course last year as part of the CELT sprint tri. This time, however, he shot out through the intersection and crossed both lanes as if he were turning left. When I realized what he was doing, I yelled, at which point, right around the double yellow line, still in aero bars, he turned back to the right, going up Rt. 77 on the wrong side of the road. He then crossed safely and proceeded onto the second loop.
This could have been a complete disaster. There were no officials slowing traffic coming in the other lane. And the one marshall directing racers was less than obvious. She was also handling traffic, for both cars and bikes, coming from two different directions. What many race organizers don't realize is that marshalls have no idea how hard we're working and what that does to our ability to think. Subtle waving isn't enough. They need to be out there with big orange flags that are impossible to miss (like the Freeport TT), and be LOUD. I've been to many other races where they fall short. I've even made wrong turns myself. We need to accept partial blame here for our mistake. No question about it. However we're talking about a life and death situation, and there need to be additional safeguards. I could go on and on with my frustrations. I just hope the organizers can learn something from this and improve for next year. Fortunately, we're all in one piece.
Anyway, Nick had a good race and upped his average speed to about 18. Here he is: 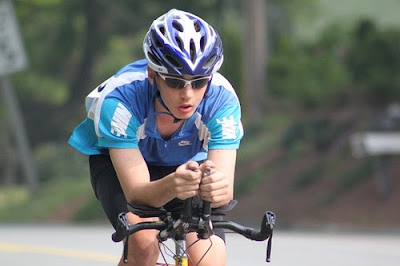 After the race, I drove back to Falmouth for a 4 mile road race hosted by Community Programs. I'm on the town advisory committee, so I wanted to support them. I ran around the field a few times for warm up. At the start, I was on the shoulder of the leader for a few hundred yards, and thought, "Uh oh. If I'm near the lead, I have to work hard. And I'm not sure I want to do that." After a couple hundred yards, Mr. Garmin said I was going at a 5:56 pace. Not good. Thankfully, another guy came along, and they left me. It was a great sight to see the leaders move away from me. The last thing I wanted to do was empty an already depleted tank. At about mile 3, I fell to 5th place, which was fine. The course was flat and slight uphill to a turnaround. I split 6:39, 7:00, 6:43 and 6:39 for a total time of 27:10 (or so). I'm very satisfied with the effort.
To cap the day off, my 9 year old Leah and I went to the Sea Dogs game, sat 7 rows behind home plate, and had a great time. We also ate way too much- sausage roll, french fries, chicken nuggets, Sea Dogs biscuit and fried dough (my favorite).
Now I need to recover and fine tune for Saturday. Mooseman is a big deal, my only "B" olympic distance race of the year beside Worlds. I obviously feel good about my bike. The swim could be marginal, but I need to remember that that's pretty good. The run should be fine, but I have some questions about it. This is the race that starts the serious part of the season. I'm looking forward to it. Good luck to those doing the Sunday 1/2 Mooseman and also those going to CT for Rev 3. It's a big weekend all around.
Posted by MaineSport at 4:58 PM