Urban Epic was my fourth race in four weeks, made up of 2 sprint tris, one modified (shorter) olympic distance tri, and a 5K run. I felt good going into this race, not too tired, but like last weekend, the butterflies didn't show up and I had no specific goals or plan...other than go hard. I guess this is a good sign...am I getting this race stuff under control?

The race started from the beach, but instead of going out at a perpendicular angle to the beach, we went out at about 30 degrees. In other words, you wanted to be far to the right. I joined the crowd and actually ran for 50-100 yards along the beach before diving in. I later heard a race official said you just need to be in ankle deep water and that running in it is perfectly legal. The swim was smooth and uneventful. After exiting the water, I stripped off the wetsuit and threw on my backup racing flats to run the half mile to the indoor transition warehouse.

The 13 mi. bike was treachorous due to the overnight rain and drizzle we had early on. It took me a good 50 yards for my brakes to even begin to engage. I took corners very conservatively- no need for a wipeout just 5 weeks before Nationals. Anyway, they closed ost of the course off to traffic, which was a great feature. The bulk of the course was a flat twice-around out-and-back around Back Bay, 1.8 miles each way. This is where I tried to crush it, other than the turnarounds. The return to the start featured two hills, with just a 20 yard flat between, the second one at an intimidating 12 degrees. I was able to go well beyond threshhold for that. Overall, I'm happy with bike especially when you consider how conservative I was. I definitely worked it, and the power numbers reflect that. I had the best numbers out of any triathlon I've done.

The 3.5 mi. run was flat, straight up, flat, back down, and flat. The mile markers were way off (seems like a simple task), so my splits were meaningless. It wasn't terribly eventful, other than like most races, I ran hard enough to the point of internal debate over how much harder I really should go.

Now to the marathon...more of a figurative one. I decided a while back to hold a surprise 40th birthday party for Christine. Friday started at 5 for a 2 mi lake swim and 3 mile run...rush home, pick up some goodies for breakfast (her actual bday)....change for work....WalMart for initial party supplies.....work for 2 hours....drive to Cumberland to drop the car off, get a ride back to UHaul- at which point the guy erroneously said I wasn't supposed to pick up the truck until 3:00- not a good way to start the marathon- but we worked it out....to South Portland to rent a tent, tables, etc....Falmouth Shaws for nonperishable food and drinks....30 min drive to Topsham to pick up the dunk tank....back to Cumberland to spend 90 min making Sangria (it was great!), leave the truck and dunk tank, get in my car....then back home around 4...breathe....the four of us then went out to dinner where I told Christine the two of us were going away, passport required, but no other details-this sent her into a complete tizzy for the next 20 hours, but successfully served as a mental diversion away from the possibility of a party...awake at 3:30, up at 5, then the easy part- the race....fly home without even looking at initial results...Christine then went to the barn to get ready for the next day's horse show and we went into HIGH gear...back to Cumberland to get the sangria and "party in a truck"....at one point on the drive I hit successive potholes, sloshing a good inch deep of sangria all over the truck...unload said truck, Shaws for food and balloons while "helper" picked up the flowers, cake and ice....at one point in Shaws, as I'm flying through the isles, Nick (at 5' 10" himself) yells, "hey, wait up, I can't walk that fast!"...Back to the house, set up the tent, fill the dunk tank and deal with everything else over a frantic 2 hours...world record shower and shave....final details for 10 minutes...guest arrive, so have to deal with the food they bring....call out for more ice....get text from the barn that she left and will be home in 20 minutes....after 15, I go out to the road, flag her down, causing a terrifying look, move her to the passenger side, blindfold her so she won't see the cars, say "we're not going on a trip, but I had something delivered." "Are there other people here?" "No." Drive in, walk around to her side, immediately in front of everyone standing silently, take her out, blindfold off, "SURPRISE!!!!"...Mission acomplished....we had a great party...the dunk tank was a huge hit....the weather cleared beautifully....I finally stopped around 10.

Oh, and if you see some drunk squirrels walking around Falmouth...the sangria was left out on the front step overnight. 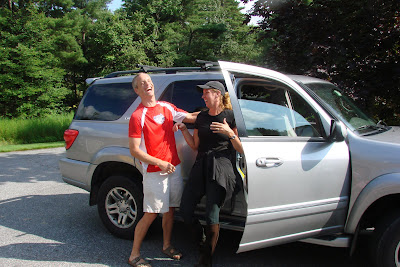 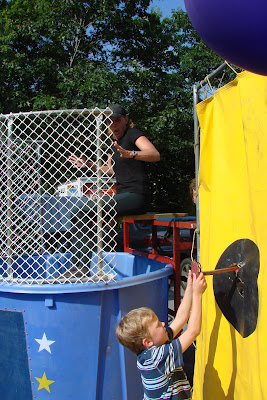